To say Team Home Grown is based around a family of hardcore racers is an understatement. A majority of this team entered in season three of the $10K Drag Shootout No Prep Edition are members of the Howe family. This clan has been into all levels of hardcore racing, including the operation of multiple successful dragstrips, along with street and no-prep-style competition, making them well-suited to this unique battle. Team leader Jim Howe, Jr. is well known in heads-up, small tire, and no-prep circles along with his father, Jim Howe. Sr., and wife, Amanda Howe. Both are racers, as well. Jim describes Bret Moore as a world-class engine builder and head porter. Bret is teamed with David Reese, the talent for chassis fabrication.

The team came into the 10-day build competition a person short of a full line-up when Gary Barker required back surgery. “I knew that David and Bret would complement one another during the build just because of their overlapping talent, so it did not intimidate us in the slightest [being short one person],” Howe says. “The team we have will assist one another at the drop of a hat.”

“We knew other teams wanted the Mustang, which was fine with us,” Howe clarifies. “We actually wanted either the S-10 or ultimately, the El Camino. We all had a comfort zone with working with either of those bodies.”

The team lightly modified the front suspension with cut coil springs and QA1 shocks. The shocks as well as a driveshaft loop and anti-roll bar from BMR Suspension, and even a roll cage, were provided. Chris Alston Chassisworks got the order for the overall X-brace style, 10-point cage assembly.

Moving to the rear suspension game plan, the team opted to install a ladder bar crossmember kit from Competition Engineering using their $7,000 gift card from Summit Racing Equipment as well as a set of used no-name ladder bars.

“I have been 4-seconds in the 1/8-mile with a ladder-bar suspension,” says Howe. “I knew from the start that whatever car we ended up with, ladder bars were our choice because of our chassis tuning experience.”

Team Home Grown ultimately took the El Camino, which it named "Smell Camino" due to deceased critters that struck your nose whenever opening the doors.

When it came to the brakes, the team tried to skirt the rules a little, which ultimately hurt its cash budget. They used a Wilwood brake kit on the front and brought what they described as a used Yamaha retrofit brake kit for the rear. The rear brakes were caught by tech officials as actually a set of used TBM low-drag brakes.

“Having never built a turbocharged or an LS-based engine, we needed lots of education before the build-off,” Howe says. “I can’t thank our personal friend, Phil Watson, enough. He is an ace LS engine builder, and he spent a lot of evenings teaching us the ins and outs.” Jim admits when planning the build, the turbocharged Chevrolet LS combination was the best choice. Yet, it was the engine platform where team members had the least personal experience.

The team began with a boneyard 6.0L truck engine and used the factory iron block, crank, and rods, combined with new rod and main bearings from Clevite. The bottom-end also received a Moroso Performance oil pan and high-volume oil pump.

Team Home Grown chose MAHLE pistons for the turbo combo and worked with COMP Cams specialists to custom spec a hydraulic roller cam (Part #54-777-11) for the engine. Other valvetrain components, such as lifters, timing chain, and rocker arms, were factory GM hardware. A used set of 7.400-inch long pushrods from BTR Performance completed that area of the engine.

COMP Cams worked with each team on their cam and valvetrain combination as needed. The Smell Camino received a cam featuring a lobe lift of .372-inch intake and .372-inch exhaust with a duration at .050-inch lift of 233-degrees intake and 243-degrees exhaust.

From the Summit Racing catalog, many other engine components were used, including ARP bolts, studs, and fasteners for the heads, main studs along with balancer, header, and bell housing bolts. A Trick Flow underdrive harmonic damper was selected.

The Howes were confident in their use of a GM Turbo-400 transmission — a raw junkyard piece was loaded up for the trek to the build competition, along with some used performance parts they scored with their cash allowance.

“With the new no-prep race format, launching with TH400 in Second gear was going to be a must,” Howe shares. “We know that transmission forward and backward. I compete with them quite a bit.”

Somehow, our Turbo-400 trans ended up with a billet clutch hub in it.  It was bead blasted to look like a stock one. The inspector questioned if it was a stock piece but didn’t know quite what it was (smiling.)  Our trans budget got hit for that one. If we really wanted to cheat, there were many things we could have tried. – Jim Howe, Jr.

A used Hughes Performance 10-inch diameter torque converter is coupled to the turbo. The Howes also hand-modified the trans pump to bleed some pressure from the torque converter. 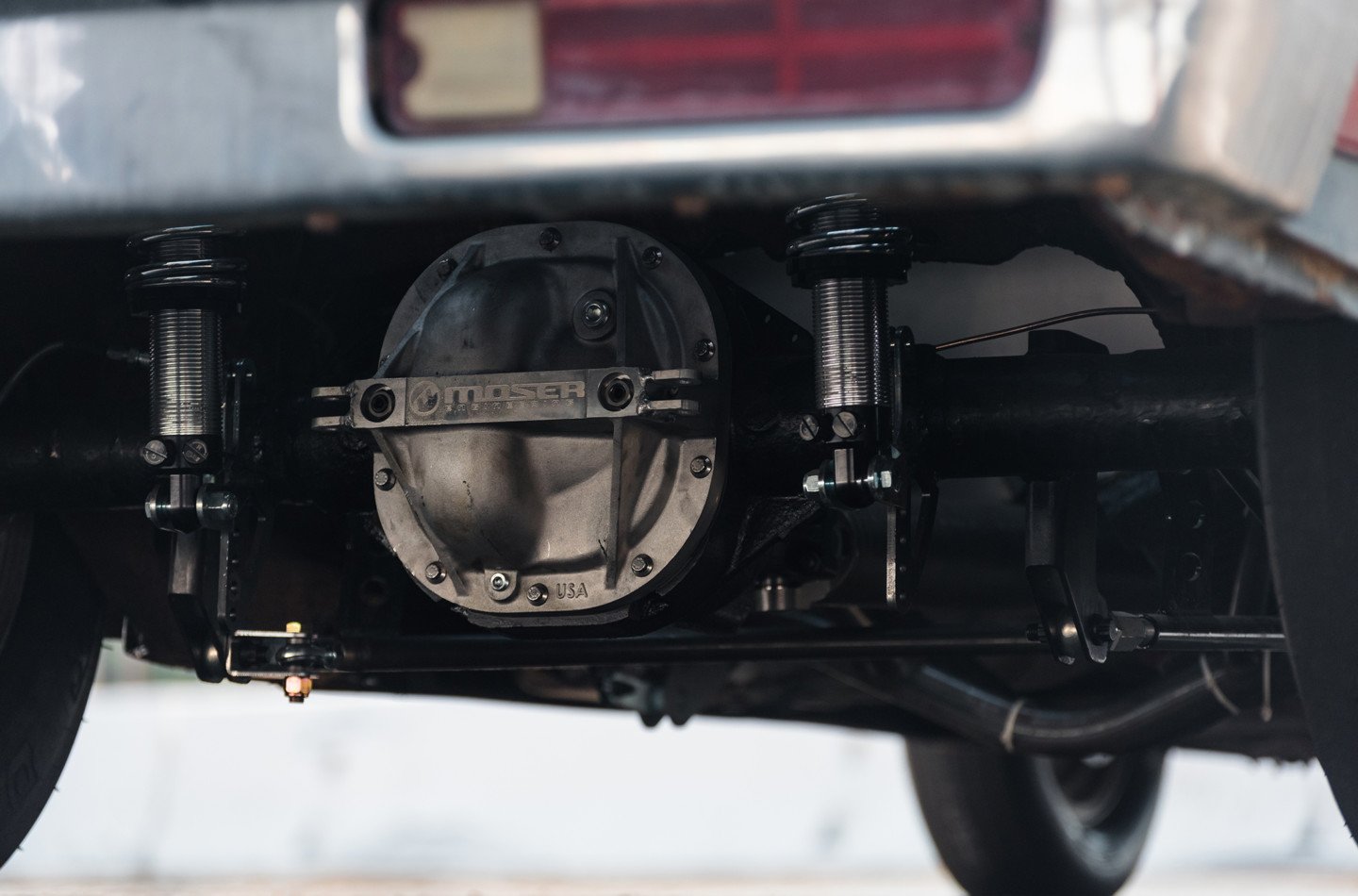 Howe says, “We knew this rear would be plenty strong and we would be working with Moser Engineering and Spicer on the spool, gears, axles, and housing ends to modify the housing width as necessary.”

“We have raced with normally aspirated and supercharged setups our whole lives,” says Howe. “We just dove in and educated ourselves concerning turbochargers as much as possible before the build competition.”

The boneyard truck intake and throttle body were utilized. This intake was outfitted with new Bosch 210-pound injectors, specially designed for E85 use, as the team chose Renegade Racing Fuels Pro E85 as its fuel.

Diving into their turbocharger setup, the team selected a BorgWarner 80mm cast turbo mated with a pair of 50mm wastegates from VS Racing, along with a Holley EFI boost controller solenoid. A set of upswept Kooks headers were coupled to the turbo with CX Racing and Summit tubing.

“I personally wanted to give Adam Hodson from Team MAK a big thank you for his initial help,” Howe comments. “As we finished the engine, I felt like the biggest dummy that had ever been. Here we got this thing done, and oh, wow, we’re not sure how to begin with the initial program to start it up!”

The El Camino was the first to be pushed upon the chassis dyno. The entire team felt good for two reasons; they afforded some time to work anything out on the dyno, and they scored their sixth team member.

“Some sort of fallout between Team Out In Front and Karl Pritz resulted in Pritz walking away from their group,” Howe tells. “With a flash, I jumped on proposing to Karl that he join our team, and he did.”

With Amanda behind the throttle, they netted approximately 750-horsepower with the first hit. Howe said, “Karl made various tweaks to the tune, and we went for our second pull. That is where all hell broke loose.”

The second pull resulted in what Howe describes as “the 6.0 engine comes unwound and what you hear is like God stepped on your ass.”

A dome pressure sensor failed during the pull resulting in the wastegate crammed shut by the boost controller. The malfunction pushed the heads off the block with what was described as water flying everywhere and the radiator cap going airborne. The engine damage ended their dyno opportunities.

“We rushed back to our garage area, and before the end of the day, Bret, Dad, and Amanda had the heads off of the car, had them welded up at a local shop, resurfaced, then came back and had it running in under two hours.”

Despite the dyno setbacks, the team is enthused. The “Smell Camino” weighs in at 3,350-pounds and features everything they hoped to achieve.

“The second dyno session just peaked at 965-horsepower before the calamity,” Howe finishes. “If all holds together following the rebuild, we have the car to beat.”

Make sure you tune into the conclusion of season 3 of the $10K Drag Shootout: No Prep Edition aired on the MAVTV network and HorsepowerWars.com, and follow along with us on Facebook and Instagram. See Team Home Grown head to Barona Dragstrip with their hefty 6.0/turbo combination and see how they fare against their smaller cubic-inch competition.